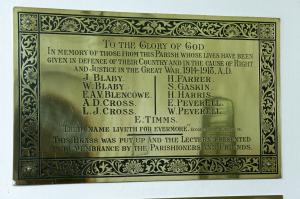 "Mr and Mrs Albert Timms, of Juniper Hill, Cottisford, have received the sad news that their eldest son, Edward, has been killed in action in France. The deceased, who belonged to the Canadians, was 39 years of age, and was a typical soldier. He formerly belonged to the famous West Yorks Regiment, having served through the Boer War, in addition to having seen service in India. He emigrated to Canada, but when the call came he at once enlisted to fight for the Old Country.
He was home on leave a short time, returning on the day of the great snowstorm. Mr and Mrs Timms have one more son, Frank, who is now serving with the Australians in France, after going through the terrible experiences of Gallipoli. The second of the two soldiers is a splendid local example of how our boys love the Old Country.
The captain of the company to which deceased belonged has written to Mr and Mrs Timms: “For in your loss I deeply grieve. Private Timms was one of my best men, and only the day before his death he volunteered for a particularly hazardous and unpleasant duty, which I found must be done. Would I had a whole company like him.”
Lance-Corpl. Murray writes a letter to Mr and Mrs Timms, which is signed by the officer, non-commissioned officers, and several comrades of deceased, in the following terms: “I am writing to you on behalf of myself and my comrades to offer you our sympathy over the loss of your son, Edward. I feel that I must do this, as he and I have chummed together ever since coming to France – over twelve months ago. He was a comrade whose loss we greatly deplore, for he was a soldier, and when I say that I mean a great deal, for I come of a family of soldiers and sailors, from my grandfather to myself, and I am the sixth boy. We have been in some bad places together, but I always felt cheerful when I knew he was going to be with us, for his cool quiet way seemed to gain one confidence, and we knew that if it was necessary we had a comrade with us who would stay to the finish. He was liked and trusted by both officers and men, and I can truly say that if he had wished it he could have gained promotion many times, but he always refused for personal reasons, which I could never understand, for he knew a soldier’s duties from A to Z. I was talking to him at the time he was hit, and I can assure you that he suffered no pain, for with a stretcher bearer I helped to take him to cover and bandage him, but he did not need it, for he died immediately, without a murmur. We buried him the next day. Our chaplain read the burial service, and his grave was well-attended to. I would also like to assure you that he died as he would have wished – in action – for the enemy were attacking. He died a hero's death, fighting for the cause of Old England and the Empire, and his name has gone to swell the list of heroes who have died for the same cause. Maybe our turn will come sooner or later, but as I have often heard Eddie say, “It is for England,” “Thy Will be done.” He died doing his duty, which is an Englishman’s privilege. He leaves to mourn his death, besides yourself and family, many of his comrades who did not fall with him. Hoping this will convey to you the message of sympathy for which it was intended.”" Bicester Advertiser 02/06/1916