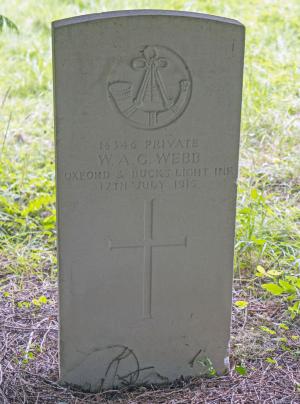 Born in Gawcott, Buckinghamshire. Died in hospital in Salisbury.

"A gloom was cast over the small village if Goddington when it became known that Pte. W.A.G. Webb, had died in hospital at Salisbury on Saturday, from meningitis, after an illness lasting some weeks. Deceased (who was attached to the 8th Batt. Oxon and Bucks Light Infantry) enlisted after the commencement of the war, being one of the seven soldiers from Goddington who are serving their King and Country. Webb’s mother was able to be with him a week during his illness, but throughout this time he was unconscious. As soon as it became known that the soldier, whom is only 19 years of age, had passed away, an effort was made to arrange a full military funeral, but, owing to the short time of the notice, this was found impossible. The adjutant of the battalion in which the deceased was, has shown every kindness to the relatives in making arrangements for the funeral, as also the matron of the hospital. The local Soldiers and Sailors Families’ Association has also interested itself in the case. The utmost sympathy is felt with the relatives.
The funeral took place at Goddington on Wednesday evening, when, in addition to the near relatives of the deceased, a goodly number of villagers gathered to pay a last tribute to one who was much loved. The coffin was met at the G.W.R. station, Bicester, and conveyed to its last resting place by hearse. The service was conducted by the rector, the Rev. G.S. Streatfeild, who, after the office for the burying of the dead had been read, feelingly referred to the tragic occasion which had brought them together. The young man, whose body they had just buried, had died in the service of his King and Country as if he had been shot by a German bullet in France or Russia. One man laid down his life in one way, and another in a different way, but under whatever conditions they died, it should never be forgotten that the fellow who sacrificed his life in the defence of his Country was full of bravery. At a time like that, their hearts were full of sympathy with the mourners and members of the family. They had seen one whom they dearly loved brought home to be laid to rest on God’s acre, and it was their prayer that God might be with the relatives in their hour of sorrow. They had done their “little bit” by giving up their son, and God would not fail them in their hour of need.
A very touching service was brought to a close by the singing of “Jesu, lover of my soul.” Flowers were sent from “His loving and sorrowful mother”; “Willie, Katie, Liver, Freddy, and Harriett”; “His loving aunt and uncle”; “The Rector and Mrs Streatfeild”; “The parishioners of Goddington”; “His loving grandmother”; “Mrs Parker, Miss Seymour, and Mary Parker”; “Fanny and Louie, the Rectory”; “Mr and Mrs Parker and family”; “Mr and Mrs F. Markham.” The funeral arrangements (locally) were carried out by Messrs. Layton and Son, Bicester." Bicester Herald 23/07/1915