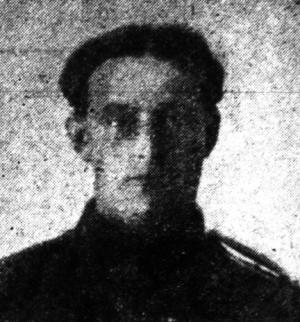 "Two deaths in action are reported this week – the second being Gunner Frederick William Fathers, whose home is at North Street. The Gunner is one of a family of soldier brothers and step-brothers and joined the Royal Field Artillery soon after the outbreak of war. He leaves a wife and one child, and had not been home to Bicester for twelve months.
The following has reached his mother through the deceased’s wife, from Major Barrington: – "I deeply regret to have to inform you that your husband was killed by a shell that fell on the hut in which he was sitting with four other men. It will be a consolation to know that his death was instantaneous, and he did not suffer at all. He was a very good man indeed, and a great loss to the Battery. He was killed at 5 p.m., and was buried just afterwards. I am very sorry for you in your loss."
When at Bicester the deceased soldier was employed at the Garth, and was 28 years of age." Bicester Advertiser 18/02/1916