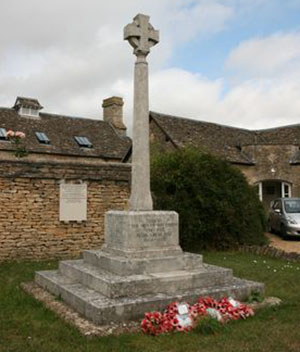 "We regret to report the death, which took place on April 19, of Gunner Walter Edgington, second son of Mr Frederick Edgington, of Kirtlington. Deceased had been formerly employed at the Cement Works, and was one of the number called to the Colours as the result of the big “comb-out” a few months ago, when the cases of all employees of military age came before the Bicester Rural Tribunal.
Some weeks ago he joined the Royal Field Artillery, and was in training, at Ripon, in Yorkshire, when, following a cold, pneumonia set in, to the effects of which he succumbed. The news of his death came as a very painful surprise to his relatives and many friends in the village, and was the more surprising by the fact that he was a man of excellent physique, and had every appearance of a strong constitution.
He was very much liked and respected by the villagers, who attended in very large numbers at the funeral which took place at the Parish Church on Tuesday. The Rev. G.C. May (vicar) met the cortege at the entrance to the Churchyard, and conducted the impressive service. The coffin was preceded to the grave by the Union Jack, surmounted with crepe, while the plain coffin, borne by late workmates of the deceased, was covered by the same emblem, in defence of the honour of which he had been serving.
The coffin bore the inscription “210057 Gunner Edgington, R.F.A., died April 19, 1917; aged 28 years.”" Bicester Herald 27/04/1917