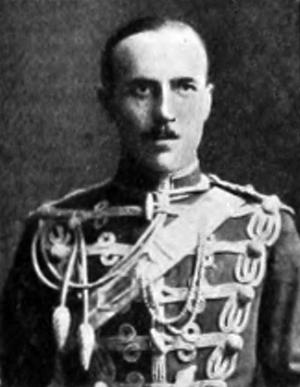 Third son of Alfred Bonham-Carter, C.B., sometime Referee of Private Bills in the House of Commons, by his wife, Mary, dau. of George Warde Norman of Bromley Common.
Born in London and educated at Harris Hill, Winchester, and Magdalen College, Oxford. Joined the 19th Hussars as 2nd Lieut. 29th Nov. 1905; promoted Lieut. 9th March 1907, and Capt. 4th Sept. 1912; served with Mounted Infantry in Northern Nigeria (1910-11), and was appointed Adjutant of Queen's Own Oxfordshire Hussars, 17th Feb. 1913; proceeded with that regt. to the Front in Sept. 1914, and was killed in action near Ypres.
Capt. Bonham-Carter was mentioned in F.M. Sir John French's Despatch of 31st May 1915.
He married Kathleen Rebecca Arkwright (a descendant of the inventor of the spinning jenny) at Cromford, Derbyshire, on 18th October 1911, and had a son and daughter; John Arkwright, born 27th March 1915; and Diana, born 31st Jan. 1913.

"We regret to state that Capt. Guy Bonham-Carter (19th Hussars, and Adjutant of the Queen’s Own Oxfordshire Hussars), died from his wounds sustained in battle on May 14th. The sad news was conveyed to the Captain’s Bicester residence, “King’s-end House”, on Monday morning and the announcement cast a gloom over the whole town.
It was in September last that Captain Bonham Carter went to the Front, and good accounts had been received from him. There is no information to hand as to where he died, but Pte. G. Gatland, of Bicester, who went out to France with the deceased officer as his groom, in a letter to his wife states that his master never regained consciousness after he was shot.
Captain Bonham-Carter was the second son of the late Mr Alfred Bonham-Carter, C.B., and was 30 years of age. He was educated at Winchester, and Magdalen College, Oxford, and joined the 19th Hussars in 1905, being promoted to Captain in September 1912. He was appointed to the Adjutancy of the Q.O.O.H. in February, 1913. He married in 1911, Kathleen Rebecca, only daughter of Mr Frederick C. Arkwright, of Willersley, Matlock.
The fallen officer left Bristol to take up his residence in Bicester about two years ago, in order to participate in the excellent hunting which this part of the country affords. He leaves a wife and two children. His son and heir was born on March 27th of this year.
The utmost sympathy is felt with Mrs Bonham-Carter, who is at present staying at Willersley, Matlock." Bicester Herald 21/05/1915