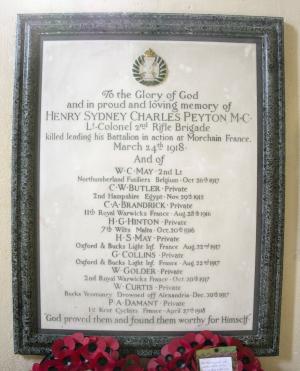 "Mrs John Brandrick, of Stoke Lyne, has during the week, been informed that her son, Pte. Cecil Arthur Brandrick, has died in hospital following injuries received to the knee. The news was received from the deceased soldier’s wife, who, however, did not state any particulars.
Pte. Brandrick had formerly lived at Fringford, but his wife has now left the district. He was a member of the Royal Warwicks, and was 24 years of age. We hope to give more particulars next week." Bicester Herald 08/09/1916

"More particulars are now to hand concerning the death in hospital of Pte. Cecil Arthur Brandrick, of Stoke Lyne, a short account of which appeared in this column last week. They are contained in the following two letters, which were received from the sister of the hospital in which Pte. Brandrick breathed his last, and which were addressed to his wife.
The first Communication, dated August 21st, ran as follows: “Your husband, Pte. Brandrick, 11th Warwicks, is at present a patient in this hospital (14th Stationary). He was wounded in his right leg, and the knee joint is affected. It has been opened in one or two places, and everything possible is being done to save the leg. He is feeling pretty weak at present.”
A week later the following, dated August 28th, was received from the same source: “I hardly know to-night how to write to you, I have such sad news to give you. Your husband had a sudden severe haemorrhage this afternoon, so severe that although everything possible was done, he did not recover, but sank very rapidly, and within half-an-hour he had passed away.”
He was 24 years of age." Bicester Herald 15/09/1916