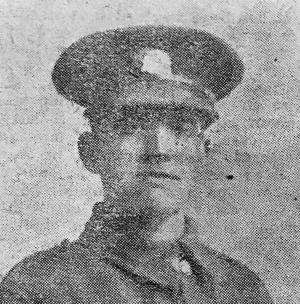 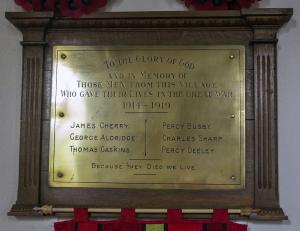 "Official information was received from the War Office as to the death at the Front of Private James Cherry, 2nd Bedfords, son of Mr and Mrs William Cherry, of Lower Arncott, near Bicester. News had previously been received from a chum of the fallen soldier telling of his death, so that his parents were prepared for the official news, which stated that Pte. Cherry was killed in action on September 25. The place of his death was not stated.
In reply to enquiries the chum of Pte. Cherry wrote: “We had been in the trenches for seven days, and were relieved early on Friday morning. We then marched back to our billets for a day’s rest and late the same night went back to the trenches, where we arrived early on Saturday morning (meaning Saturday, September 25th). We went straight over the parapet, and your son was hit as we got over the second line of German trenches. I was not with him when he fell, as I am in another platoon. He was very much liked by all the chaps of the fifteenth platoon, and will be missed very much.”
Private Cherry, whose 28th birthday took place about a week before he was killed, was a native of Arncott, and had, until he joined the Army, been employed on the estate of Lady Werner, Luton. He enlisted in response to the Parliamentary postal canvass, and went to the Front soon after Whitsun. A quiet, reserved fellow, his death will be mourned by not a few. Reference was made to the occurrence by the Rev. C. Bayfield at Ambrosden Church on Sunday. Before reading out the names of those who had answered the call of King and Country, as is the custom Sunday by Sunday, Mr Bayfield made allusion to the name of James Cherry, which would now have to be omitted from the list owing to his having fallen on the field of battle. It was an honour that a man should willingly give himself to his Country’s service in time of need, and it was pleasant to know that James Cherry died doing his duty. His name was now inscribed on that long Roll of Honour, sad, but glorious in the assurance that no danger can deter when duty calls." Bicester Herald 22/10/1915